Magica De Spell attempts to ambush Scrooge McDuck (and his Number One Dime) at a comics convention in Copenhagen. Scrooge turns out to be there to visit an old friend, and Magica gets more than she bargained for…

It was initially not meant for wider release, but the interest of a Marco Rosta story where Scrooge meets Don Rosa proved too powerful for other countries to pass up on, even without the context of the Copenhagen Comic-Con. The story was eventually printed in English as a bonus story in Volume 10 of Fantagraphics's Don Rosa Library, the last story in the entire Library. On this occasion, it was localized by David Gerstein.

Due to these peculiar circumstances, the story was originally given the Denmark-specific INDUCKS code "D/DK 2015-005", only to be recategorized as a rank-and-fine Egmont story under "D 2015-226". Curiously, both codes are still active, making A Hot Meeting one of the only (if not the only) stories on INDUCKS to be documented twice under two different codes. 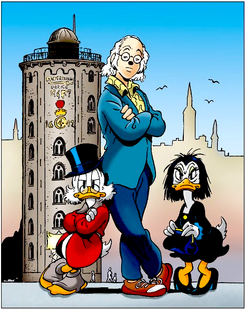 Cover illustration for the story by Marco Rota.
Community content is available under CC-BY-SA unless otherwise noted.
Advertisement