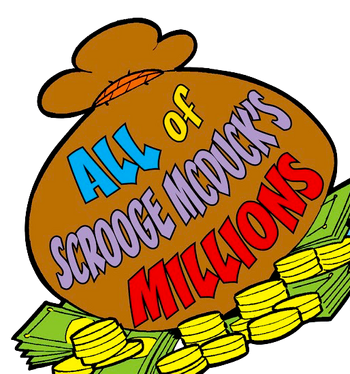 All of $crooge McDuck's Millions, also known as Uncle Scrooge: My First Millions and called Tutti i milioni di Paperone in the original Italian, is a comic series written by Fausto Vitaliano with a variety of artists.

The series is bookended by Scrooge McDuck poring over an old photo album of his, discovered by Grandma Duck in her farm's attic, in which each picture was taken as he earned each of his ten first millions. Thus, each chapter sees Scrooge tell the story of how he learned his nth million, thereby explaining each photograph.

Though the series' title claims to tell about "all" of Scrooge's millions, it actually focuses on his few first — a discrepancy covered in the series' second American translation, which retitles itself My First Millions. It started out as a ten-chapter miniseries (all ten of which have been translated in English), later expanded in the mid-2010's to go up to his 20th million.

The series is largely unconcerned with fitting itself in the chronology of The Life and Times of Scrooge McDuck; Scrooge going from one to well over twenty million dollars happens in the interval between Chapter 8 and Chapter 9 of Rosa's series, but it's heavily implied that he hadn't left the Klondike during that period, or, at least, not for significant lengths of time. Chapter 11 sees the most "globe-trotting business adventures" from Scrooge, and as such one might be tempted to place it there, but Scrooge is already a billionaire by that point.

Retrieved from "https://scrooge-mcduck.fandom.com/wiki/All_of_Scrooge_McDuck%27s_Millions?oldid=15722"
Community content is available under CC-BY-SA unless otherwise noted.