Having studied Computer Graphics at the New Media Arts Faculty, Anna Poszepczyńska launched her first major comic project in 2017, a multimedia puzzle-solving story (intended for an audience of 12 and older) designed to be read on mobile devices, but still, fundamentally, a hand-drawn comic adventure. She described manga and Disney Comics as her main two sources of inspiration. 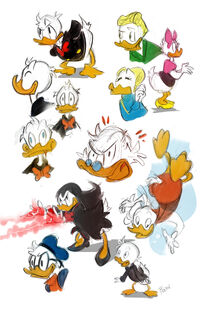 Other Duck sketches created by Poszepczyńska in 2018.
Add a photo to this gallery

Retrieved from "https://scrooge-mcduck.fandom.com/wiki/Anna_Poszepczy%C5%84ska?oldid=48140"
Community content is available under CC-BY-SA unless otherwise noted.