The Toon of a Thousand Faces
Judge Doom

Dating back to 1921 and the silent cartoon era, the Toon known as Baron Von Rotten became famous by perfecting disguises and Toon-based shapeshifting to portray hundreds of very different screen villains — earning him the nickname of the "Toon with a Thousand Faces". The extremely successful Baron became a millionaire and made good with his name by building himself a castle for a villa.

Von Rotten's madness soon found something to latch onto; some time in 1946 or 1947, he heard of plans for the building of freeways, which Toontown blocked the way for. The then-brand-new idea of freeways seemed inexplicably fascinating to the deranged Toon, who hatched a crazy scheme to destroy Toontown (killing all its inhabitants in the process), and also to ruin Hollywood's bus system so everyone would be forced to use the freeways once they were built. This involved creating himself a non-Toon alias, "Judge Doom", developing a way to destroy Toons (the Dip), and murdering human detective Teddy Valiant to cover his tracks. In 1947, after some additional, unscheduled murders, that plan came unfurled thanks to human Eddie Valiant and Toon Roger Rabbit, with "Doom"'s true identity exposed and Von Rotten burnt away to nothing by his own Dip.

A murderous maniac is not so easily disposed of, however. A group of cartoon weasels (Brothers to the late Toon Patrol, Von Rotten's original minions from his "Judge Doom" days) brought him back to life using mad science and old model sheets. The resurrected Von Rotten, still quite insane, was now bent on revenge against Roger Rabbit, whose career he attempted to ruin, impersonating C. B. Maroon to do so. That scheme didn't fare out any better than the first, and again ended with Von Rotten dipped into oblivion.

Baron Von Rotten was first seen in 1988 in Who Framed Roger Rabbit. 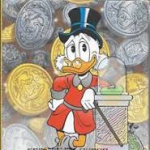