Beagle Boys is a cartoon short featuring the Beagle Boys.

The Beagles break into the storage room of some sort of zoo, stealing several animal-filled crates, including a rather disgruntled bird. Unbeknownst to the group of thieves, an unseen observer looks on....

This short was released in 2014 on the Polder Animation website as well as the official Dutch Donald Duck website. It was created by Polder Animation to promote the game DuckWorld Adventures, and thus uses the animation style of the game. 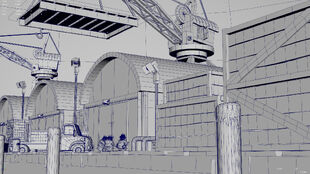 3D Wireframe of a scene.
Add a photo to this gallery
Retrieved from "https://scrooge-mcduck.fandom.com/wiki/Beagle_Boys_(cartoon)?oldid=39288"
Community content is available under CC-BY-SA unless otherwise noted.