Beauregard stories
Beauregard was a human man, now some unspecified type of undead.

Beauregard was the butler of Captain Bartholomew Gore and Priscilla in the early 19th century. After the tragic deaths (and undeaths) of his masters, Beauregard remained at the house, even past the point of his death — after which his remains were interred in the berm cemetery of Gracey Manor next to those of the Captain.

Over one hundred and fifty years after the events, he gave a tour of the Old Gore Mansion to a group of tourists, concealing his true nature and merely stating that he “had been in the family for many, many years”. He told them the story of Bartholomew and Priscilla with the help of Priscilla's ghost, although he claimed to only know it second-hand.

Beauregard was created around 1957 by Ken Anderson as a potential live host character for what would become The Haunted Mansion.

By the time the attraction opened in 1969, however, the host-butler character had been scrapped in favour of a bevy of live Maids and Butlers with minimal lines, and an invisible Ghost Host with prerecorded lines as the show host. It is hotly debated whether the Ghost Host is still intended to be the ghost of the Mansion's butler, whether named Bauregard or otherwise. The Host is outright conflated with Beauregard in the fan blog Ask the Ghost Host, whose canon's Ghost Host is named Beauregard Ghast.

At any rate, Beauregard was alluded to in the 2011 expansions to the queue of the Walt Disney World version of the Mansion, which added an epitaph-less tombstone for Beauregard to the Berm Graveyard, located close to Captain Bartholomew Gore’s. He also finally made his proper debut in a story in 2020 with A Haunted Mansion Tale, a Halloween special for the D23 website, edited out of Ken Anderson's originally sketches and story notes. 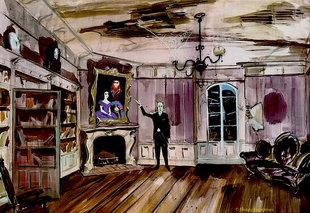 Concept painting by Ken Anderson of Beauregard in the Picture Room. 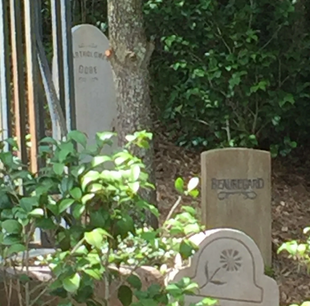