Scrooge McDuck Wikia
Register
Don't have an account?
Sign In
Advertisement
in: Characters, Males, Characters of unknown species,
and 6 more

Bluebeard stories
Bluebeard is or was a man of unclear species.

Bluebeard was, by the early 1960's, remembered a notorious villain from a time now long past,[1][NON-DISNEY] After marrying and murdering six “winsome” wives — one a year starting in 1434 — he found one too clever for him, Lucretia, who did him in in 1440. Bluebeard and his wives were eventually interred in a huge and ornate crypt which found its way to the Gracey Manor property, suggesting Bluebeard and his wives might themselves be among the “famous ghosts from all over the world” who retired to the Haunted Mansion in their late afterlife.[2] This monument may not actually have contained the remains of Bluebard, as another account shows that he was one of the occupants of another area of the Mansion entirely, the Burial Crypt of Famous Villains.[3]

The fairytale character of Bluebeard (or Barbe-Bleue in the original French) was first mentioned in a canonical Prime Universe source in the non-Disney 1963 crossover story Woody, Knothead and Splinter Search For Pirate Treasure. He later played a somewhat more important part, via his prominent crypt, in the 1971-opened Walt Disney World remake of The Haunted Mansion. A different version of Bluebeard's burial place was proposed by Marc Davis in the 1980's during development of the Tokyo Disneyland Haunted Mansion, with Bluebeard as one of the potential occupants of the Burial Crypt of Famous Villains, which would serve as the ride's unload area, but this was never implemented.

Interestingly, Bluebeard's mention alongside Captain Kidd in the 1963 story suggests the anonymous writer mistakenly assumed “Bluebeard” to have been a pirate (along the lines of Blackbeard and Redbeard), which he is not in any of the classical versions of the tale.

The fact that Bluebeard's name and epitaph on his crypt are in English, and that the names of his wives are all English, suggests that the Prime Universe Bluebeard was in fact British; this conflicts with the original versions of the tale, where he is implicitly French, a detail retained in most retellings. Indeed, Bluebeard is sometimes (spuriously) conflated with the historical figure of Baron Gilles de Rais, a link the character's appearance in The Haunted Mansion seemingly makes use of when assigning him the year of death 1440 — Baron Gilles' historical date of death. 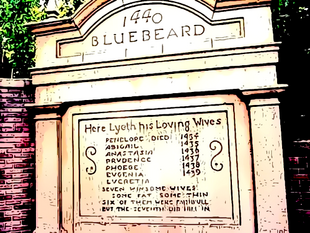