Formerly a rescue St. Bernard in the Alps, Bolivar was the one to rescue Donald Duck, Mickey Mouse and Goofy during a climb gone awry in 1936; he was subsequently adopted by Donald Duck, who brought him home and kept him as a pet ever since. Bolivar is not particularly intelligent, but he is placid and friendly. It seems that after being brought to Duckburg Bolivar "renounced" his past as a rescue dog, to the point that he refused to go near snow even if Donald ordered him to do so.

Bolivar was first seen in the 1936 cartoon Alpine Climbers; later that same year, More Kittens established he had moved to the city, before the March 1938 comic Forbidden Fruit revealed his owner to be Donald Duck.

Authors have gone back and forth on the dog's name; Al Taliaferro had first baptised him “Tolliver”, after the common American pronunciation of his own name. Later reasoning that it was somewhat vain of him to have called a character after himself, he changed this to the similar-sounding Bolivar, which became the Saint-Bernard's classic name; but some thought it might be inappropriate for a "stupid dog" to have the name of a key figure in Venezuelan history, commonly considered a "national hero". Thus, several editors over the years have tried to suppress "Bolivar", for fear of Venezuelan authorities complaining, replacing it with “Bornworthy” or “Bernie”, though neither name has stuck. 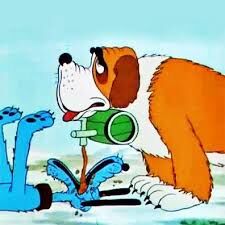