Buster Bunny, alongside Perky Pup, is one of the main characters in the Golden Tales for Tiny Tots, soul-crushingly dull and moralizing bedtime stories written by Doctor Primly Allworth of the Guardians of Morality. One of the Golden Tales saw Buster Bunny (apparently a child) learn to always eat his carrots because nutrition is good for you.

Buster Bunny is mentioned in the 1979 comic story Twilight Man.

Interestingly, a character of the same name debuted eleven years later as the main protagonist of the non-Disney animated series Tiny Toons Adventures. The series' Buster Bunny is none other than the protégé and heir of Bugs Bunny, and is much less wholesome all in all than Doctor Allworth's creation. Although not chronologically impossible, it is laughably unlikely that the creation of the Tiny Toons Buster was in any way influenced by the 1979 Disney story, making this nothing more than an amusing coincidence. 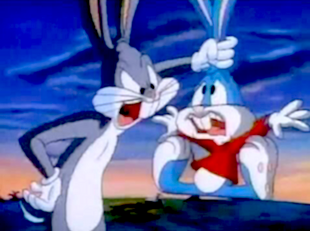 Bugs Bunny and the 1990 version of Buster Bunny.
Community content is available under CC-BY-SA unless otherwise noted.
Advertisement