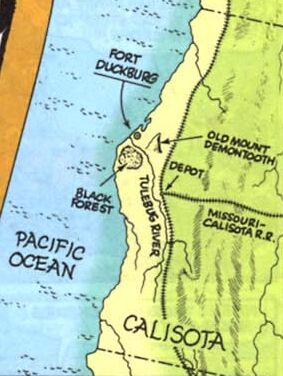 Calisota is a state in the United States of America.

Calisota is located on the West coast. Its main cities are Duckburg (although Duckburg itself appears to be somewhat independent from the rest of Calisota), Mouseton, St. Canard and Goosetown. Other cities include Hentown, Catville, Pickleburg and Omelet.

While Calisota was never very populated by Native Americans, this may actually be due to the many early European colonies that were established there. Indeed, a medieval village was already present near Mount Duckburg in the year 1000, founded by Mickey Mouse's own ancestor Marco Topo.

The government system of Calisota is unknown. However, Duckburg seems to have its own governor, if it is not a sort of city-state. A "Duckburg embassy" exists, which would place it outside the USA at a legislative level. The Duckburg embassy displays a flag of Duckburg, which consists of a white duck over a green field. However, at one point, Scrooge gained a short-lived independence from the United States for Killmotor Hill, thus placing Duckburg within the United States. Much of Duckburg is owned by Scrooge McDuck.

Calisota is a center for space exploration