Captured in Bananaland (entitled Zio Paperone e il Casco d'Oro in the original Italian), for which two other English titles, The Other Golden Helmet and Brigitta's Double Jeopardy, were considered, is a comic story written by Romano Scarpa based on a premise by Carl Barks, and penciled by Scarpa with inking by Sandro Zemolin. It features Brigitta MacBridge, Scrooge McDuck, Huey, Dewey and Louie Duck, Donald Duck, Gyro Gearloose, the Beagle Boys, and, in their debuts, the Quanchos, including the Old Qualani and Hitta, as well as Justice O'Piece. A sketch of Mickey Mouse is visible on the cover of a Topolino issue Donald is seen leafing through. The name of Neptune is also mentioned.

When Brigitta MacBridge is gifted a sample Gyro Gearloose's latest invention (incredibly potent Money Perfume), she sprays herself with large amounts of it and discovers that this unfair advantage is enough to sway Scrooge McDuck into finally acquiescing to her marriage proposal! Just as the Beagle Boys planned, for they ordered the Perfume from Gyro, hoping to rob the Money Bin while Scrooge is distracted by his honeymoon… Speaking of travels, after Scrooge's faithful nephews foil her nuptial plans, a repentant Brigitta flies to the Bananias Archipelago to clear her mind, only for the entire adventure to take an unexpected turn as Brigitta is kidnapped by an ancient underground people to become their new queen while Brigitta's Quancho lookalike Hitta wreaks havoc in the surface world!

Captured in Bananaland was based on a sketch given by Carl Barks to Romano Scarpa in 1975, which suggested the idea of Brigitta ensnaring Scrooge with Money Perfume. Scarpa eventually used that idea as a springboard for his bananas epic, which was released in March of 1978 in Topolino #1061 and #1062. It was eventually printed in English in Disney Masters #8, with localization by Joe Torcivia and an introduction by David Gerstein. 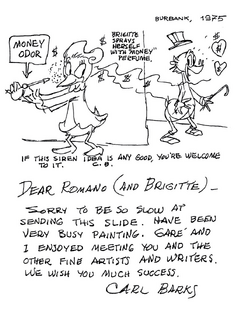 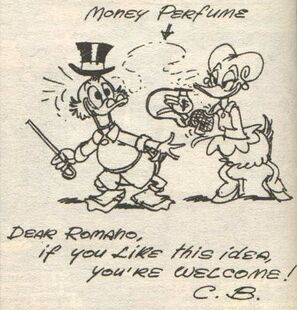 Recreation from memory of the sketch by Scapra in 1993, as the original Barks piece was believed lost. 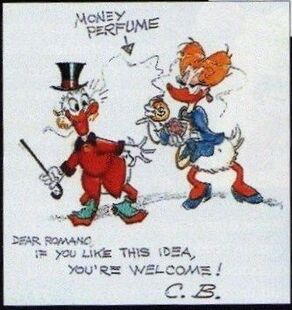 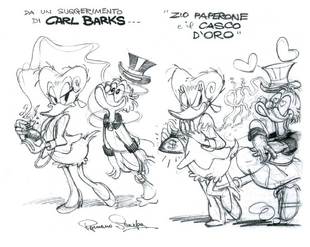