Challenge of the Senior Junior Woodchucks

Challenge of the Senior Junior Woodchucks!

Challenge of the Senior Junior Woodchucks is a television cartoon episode, the debut of Season 3 of DuckTales 2017; written by the series' usual writing crew, its script was finalized by Madison Bateman and Francisco Angones, with the episode being directed by Matthew Humphreys. It features the 2017 Continuum versions of Scrooge McDuck, Donald Duck, Louie Duck, Dewey Duck, Webby Vanderquack, and Della Duck, Launchpad McQuack, Lena De Spell, Doofus Drake, various members of F.O.W.L. (including the Buzzard Brothers, Gandra Dee, Funzo and Black Heron), as well, obviously, as the Junior Woodchucks as a whole, and, in its 2017 Continuum debut, a Tri-Crested Tittertwill, the Tittertwill Bird of Knowledge. Isabella Finch makes her debut, as do Violet Sabrewing's Fathers. The Unfathomable Phoenix is heavily mentioned, and Fergus McDuck, Downy O'Drake, the Fever Beast of Tibet and the Swiss Swarmy of Microbeesia all make flashback cameo appearances. Clinton Coot is seen on a portrait.

While Webby, Dewey and Louie Duck join the rejoined trio of Scrooge McDuck, Donald Duck and Della Duck on an adventure questing for a lost Woodchuck treasure, Violet Sabrewing and Huey Duck are themselves competing for an advanced rank within the Junior Woodchucks. And Dewey keeps trying to pull out of Scrooge's quest to go on his own adventure following an exotic bird whom he has decided is now his sidekick! Who knows where any of this will lead? Probably nowhere good…

Challenge of the Senior Junior Woodchucks debuted on April the 4th, 2020. A clip from it was released ahead of time under the title of A Brand New Adventure!. 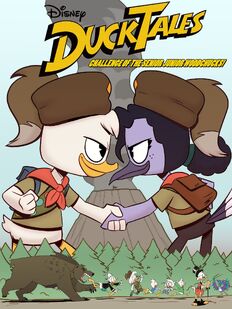 Movie poster (by Matthew Humphreys).
Add a photo to this gallery
Retrieved from "https://scrooge-mcduck.fandom.com/wiki/Challenge_of_the_Senior_Junior_Woodchucks?oldid=46733"
Community content is available under CC-BY-SA unless otherwise noted.