Creeper was a small male goblin.

This small, hunchbacked goblin became the toadie of the Horned King in unknown circumstances. Though he had a mean streak of his own, Creeper was more of a victim than a villain, and despite his pretense of adoring his master, he celebrated merrily when he thought the King dead in the explosion of his castle, which Creeper had escaped on the back of one of his master's Gwythaints. The freed henchman then bought a boat and began a quiet, honest life helping people cross the Swamp of Spells aboard said rowboat, for a price of course.

Scrooge McDuck Wiki has a collection of images and media related to Creeper.

Creeper first appeared in 1985 in The Black Cauldron. He does not appear in Lloyd Alexander's Chronicles of Prydain. Interestingly, at one point in development, Creeper was not a goblin but an ugly, Quasimodo-like man; moreover, model sheets refer to Creeper as "the Horned King's Dwarf", even though he is ostensibly a goblin. 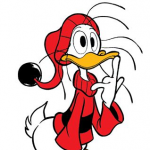