Donald Duck at the Toy Store is an illustrated text story written by Mary Carey. It features Donald Duck, Huey, Dewey and Louie Duck and the Mayor. A portrait of Scrooge McDuck can also be seen, as can the face of Captain Hook on a TV screen.

Listlessly watching TV, Donald Duck is suddenly inspired to become a TV star and instantly heads to the nearest movie studio, where he is given a job as a stunt driver. Predictably, things go very wrong very quickly.

Donald Duck , TV Star was published as book #6 of the Disney Easy Readers series in 1988.

The story features a portrait of Scrooge McDuck hanging in Donald Duck's house which appears to be rather off-model; not only does Scrooge not wear his usual costume but one rather more ostentatious than the miser would usually be caught dead in, but he is depicted with gray hair instead of feather-colored whiskers, as occasionally happened in the 1950's and had been brought back into public consciousness by Scrooge's portrayal of Ebenezer Scrooge in Mickey's Christmas Carol. 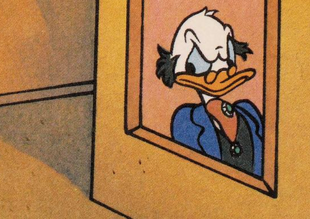 The atypical framed portrait of Scrooge.
Add a photo to this gallery
Retrieved from "https://scrooge-mcduck.fandom.com/wiki/Donald_Duck,_TV_Star!?oldid=34679"
Community content is available under CC-BY-SA unless otherwise noted.