Donald and the Ghost

Donald and the Ghost

May of 1985 (release)
Donald and the Ghost (Donald et le Fantôme in the original French) is an illustrated text story by an unknown writer and illustrator. It features Donald Duck, Daisy Duck, Gladstone Gander, Huey, Dewey, and Louie, and nonspeaking appearances by Scrooge McDuck, Gyro Gearloose and Fethry Duck. It also mentions D'Artagnan.

Donald Duck invites himself to a masked ball at the Haunted House, but learns that Gladstone Gander is planning on wooing Daisy Duck there. To prove his "courage", Donald (disguised as a musketeer) has Huey, Dewey and Louie Duck dress up as giant bats so that he can appear to chase them away before Daisy. The plot goes off, but the "bats" are soon followed by a genuine, threatening spectre…

Donald and the Ghost was first printed, in French, in May of 1985 as part of the Disney Club du Livre series, and reprinted with a new cover by a different artist in 2001. 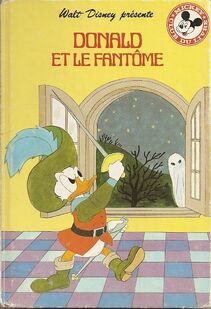 The 1985 cover for the story.
Community content is available under CC-BY-SA unless otherwise noted.
Advertisement