Double-O-Duck in You Only Crash Twice

Double-O-Duck in
You Only Crash Twice

When F.O.W.L.'s latest recruit Steelbeak kidnaps Launchpad McQuack and Dewey Duck while they're playing a high-stakes V.R. spy game called Double-O-Duck, the two friends don't realize what a dangerous game they're now engaged in! What's more, Launchpad is soon zapped by an intelligence ray that makes him take on a new persona that just might be able to save all of Duckburg from Steelbeak's machinations! 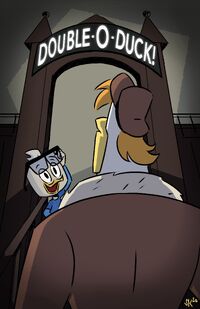