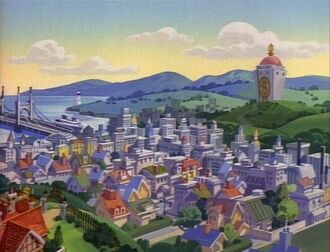 Duckburg is a city in Calisota. It is the home of Scrooge, Donald, and most of the main characters.

Duckburg was founded by pioneer Cornelius Coot, although there had been settlements there long before his arrival (most notably, Sir Francis Drake had built Fort Drakeborough on the hill where Scrooge McDuck's Money Bin now stands). For a long time, it was only a small farming village, until the arrival of businessman Scrooge McDuck made it into a large industrial city.

Retrieved from "https://scrooge-mcduck.fandom.com/wiki/Duckburg?oldid=1770"
Community content is available under CC-BY-SA unless otherwise noted.