The Mummy's Ring
The Duckburg Museum is a building located in Duckburg.

As its name states, the stately Duckburg Museum is the city's primary, all-purposes Museum. It contains a number of artifacts, from an Old Viking Ship to "square mayan rocks" later discovered by Donald Duck to be Square Eggs.

The Duckburg Museum first appeared in the 1943 Carl Barks story The Mummy's Ring. 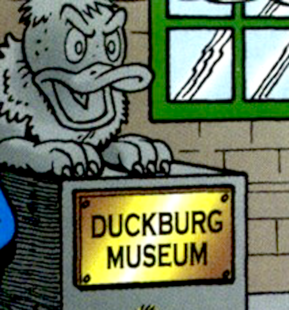 In Don Rosa's stories, he depicted the lion statues at the Museum's entrance with duck beaks.
Français Italiano
Community content is available under CC-BY-SA unless otherwise noted.
Advertisement