The Secret of Success

Somehow descended from Erasmus Coot, Duckson O'Drake was an Irishman who emigrated to Glasgow, Scotland. He married a wily woman named Jenny and they had four daughters: one who later became the mother of Rumpus McFowl and whose name remains unknown; Griseldis; Vera; and finally Downy O'Drake, Scrooge McDuck's mother. Duckson was every bit as stingy as his grandson (which might have been among the reasons for him to move to Scotland), with whom he had a good relationship; he wrote him a letter where he wrote his "secret of success", the master word of which was to always be thrifty.

He was mentioned in 1961 in The Secret of Success. Oddly, in the English version, Fergus McDuck was used instead as the author of the "Secret of Success". As a result, his English name of Duckson O'Drake is unofficial, being a mere approximate translation of the Italian name.

In Johannes A. Grote's Duck Family Tree, the father of Scrooge's mother is none other than Pothole McDuck, as the German translation of The Great Steamboat Race that Grote had to work with made Pothole Scrooge's grandfather instead of his uncle. Pothole is depicted by Grote as looking more or less identical to Scrooge's daydream in that same story of what he would look like if he were a Southern gentleman. Due to another translation mix-up, Jake McDuck, now described as Scrooge's great-uncle, is inserted as Pothole O'Drake's brother. Both are, for unknown reasons, retconned by Grote to be descended from Erasmus Coot somehow. 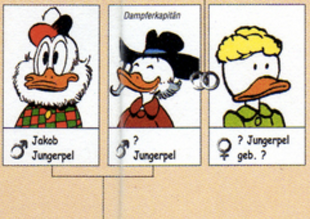 The Jungerpel (O'Drake) family in Grote's tree.
Add a photo to this gallery
Retrieved from "https://scrooge-mcduck.fandom.com/wiki/Duckson_O%27Drake?oldid=40586"
Community content is available under CC-BY-SA unless otherwise noted.