The Easter Bunny is the embodiment of the holiday of Easter. A cheerful anthropomorphic rabbit (who has appeared in many forms, all variations of this basic concept), the Easter Bunny travels the world on Easter aboard an unbelievably fast flying carriage pulled by geese with aerodynamic beak covers. The Bunny's purpose is to hand out painted eggs, and chocolate eggs, in much the same way that Santa Claus hands out presents, although his motives are somewhat less selfless than Santa's, being that he only started the whole thing as a way to get rid of the excessive quantities of eggs laid every year on Easter by Henrietta. Donald Duck and friends have come across the Easter Bunny on several occasions, with Scrooge McDuck eventually discovering the true secret of where the eggs came from.

The Easter Bunny first appeared in the Disney comics universe in the 1987 Dutch story Paashaas (a title literally meaning The Easter Bunny), in which Brer Rabbit rescued him from Brer Fox. He has appeared with a variety of designs in various media, though his most enduring one (as depicted above in the Infobox) was created by Vicar in The Easter Mystery, from 1999.

A costumed Easter Bunny meet'n'greet character, with a Mrs Easter Bunny, exists for the Easter celebrations in Disneyland, with yet another design for the character. 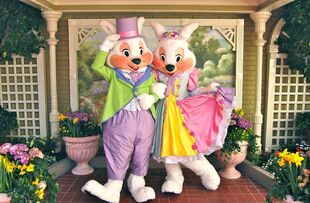 Mr and Mrs Easter Bunny as seen in the Disney Parks.
Community content is available under CC-BY-SA unless otherwise noted.
Advertisement