Fifi the Ghost stories
Fifi, also spelled Fi Fi, is the ghost of a female non-anthropomorphic poodle; in undeath, she gained some anthropomorphic qualities, like other animal ghosts in the Haunted Mansion.

Fifi is one of the animals buried in the Haunted Mansion's Pet Cemetery, and, as such, her tutu-wearing, surprisingly intelligent ghost is one of the Mansion's “999 happy haunts” — though Fifi's happiness is very relative as she insists that she was, in life, the pet of the Bride, a fact of which the Bride has no memory whatsoever, refusing to welcome "that weird rat-dog" into the Attic.

Fifi's tombstone was one of the additions to the Disneyland Haunted Mansion’s Pet Cemetery tableau in 1993, having been, according to Long-Forgotten Haunted Mansion, inspired by the tombstone of Sparky in Tim Burton's original live-action Frankenweenie. Fifi was given more of a backstory in 2005 in the comic story While the Fifi is Away.

The idea of tying Fifi with the Bride may be inspired by one of Marc Davis's concept sketches, where the Bride did indeed have a ghost dog accompanying her, though not a poodle. 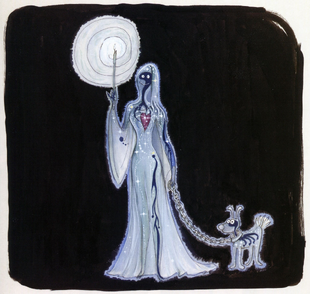 Marc Davis's painting of Beating Heart with a ghostly dog — though not Fifi. 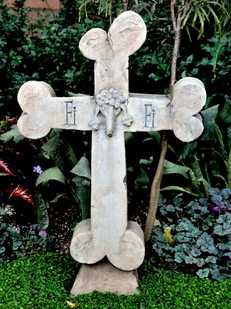 Fifi's tombstone in The Haunted Mansion. (Picture by Davelandweb.com)
Community content is available under CC-BY-SA unless otherwise noted.
Advertisement