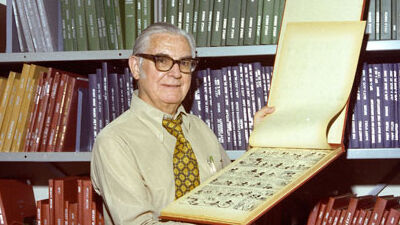 Young Floyd Gottfredson developped an interest in cartooning as a hobby when he was homestuck by a hunting accident. In the late 1920's, he'd become enough of an artist to draw professionally for various local newspapers and magazines. In 1929, he got himself hired by the Walt Disney Studios as an apprentice animator. Shortly thereafter, he was tasked with taking over the art of the Mickey Mouse comic strip, which had originally been drawn by animator Ub Iwerks but had become too much work for Mickey's co-creator.

The strips' plots were initially given to him by Walt Disney himself. However, Disney too soon became too busy with the animation department and the writing was taken over by Ted Osborne (1934–49), Merrill De Maris (1934–42), Dick Shaw (1942–43), Bill Walsh (1943–64), Roy Williams (1964) and Del Connell (1968–75), all of whom worked closely with Gottfredson who often submitted his own ideas. Between 1934 and 1948, Gottfredson also delegated the inking of his penciled art to other artists (including primarily Duck artist Al Taliaferro). Gottfredson and his favorite collaborators Merrill De Maris and Bill Walsh were responsible for creating most of the recurring Mickey Mouse comic characters (including Chief O'Hara, Eega Beeva and the Phantom Blot).