Fluffy and Mervin are two mischievous friends who live with a person called Debbie, whose phone they frequently borrow. They were once secretly members (possibly the only members) of a secret society called the Legion of the Chartreuse Tortoise, which is a rival to the Horde of the Violet Hare — a fact they did not hide very well. After the dissolving of the Legion, Mervin later founded yet another one, “the Passel of Pastel Ponies”, without having much more success than previously in disguising his true identity.

Beyond the aforementioned crossing over of Retro Duck in Fluffy and Mervin, the duo are mentioned as members of the Legion of the Chartreuse Tortoise in the comment section of several posts of Joe Torcivia's The Issue At Hand, the relevant posts being the work of Debbie Anne Perry herself, subsequently approved by Joe Torcivia. 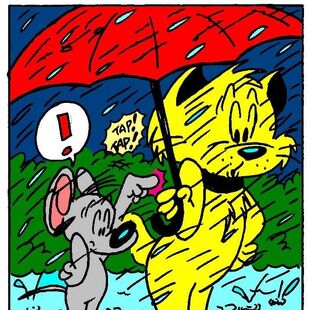 Fluffy and Mervin in colour in their original comic strip.
Community content is available under CC-BY-SA unless otherwise noted.
Advertisement