Freddie the Bat, who died in 1847, was a pet of the masters of the house, and became one of the animals buried in the Haunted Mansion's Pet Cemetery, with an upside-down “We Miss You” for an epitaph. As such, his ghost is one of the Mansion's “999 happy haunts”. Like other animal ghosts from the Pet Cemetery, Freddie is endowed with the power of speech in his afterlife, though he speaks only in broken grammar.

Freddie's tombstone was one of the additions to the Disneyland Haunted Mansion’s Pet Cemetery tableau in 1993.

As a pet bat to the masters of the house, Freddie may have been inspired by the Man-Eating Bat of Marc Davis concept art, who also inspired the 2015 redesign of the Attic Bats. 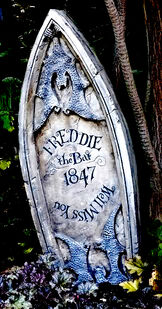 Freddie's tombstone in The Haunted Mansion.
Community content is available under CC-BY-SA unless otherwise noted.
Advertisement