Raiders of the Doomsday Vault

The Dangerous Chemistry of Gandra Dee
Friendship Hates Magic is the 8th episode of DuckTales 2017’s Season 2, a television cartoon episode. It features the show's version of Webby Vanderquack, as well as Lena De Spell, Emily Quackfaster, Launchpad McQuack, Duckworth, and, in their debuts, Violet Sabrewing, several Tulpas and Ralph. Sirius Axeldent makes a cameo appearance; the demon Rakshassah, Scrooge McDuck and “the boys” (Huey, Dewey and Louie Duck) are mentioned, as is, of course, Magica De Spell. The show's version of Paddywhack makes his debut, alongside a mention of Quackerjack.

Webby Vanderquack's new friend, the mysterious Violet Sabrewing, has a sleepover with Webby, despite the insistence of Lena De Spell (still watching over Webby as an invisible, powerless ghost from the Shadow Realm) that Violet seems to have ulterior motives! Despite her attempts not to let this sleepover party end in supernatural disaster like all her previous ones, Webby is soon convinced by Violet to carry out a dangerous Demogorgan ritual in order to open a gateway to the Shadow Realm and save Lena!

Friendship Hates Magic was released on April the 28th, 2019 in the Netherlands. Its release in the United States of America was, however, delayed until the 15th of May; there, no episode aired on the 28th of April, and the episode following Whatever Happened to Della Duck? was instead Treasure of the Found Lamp. 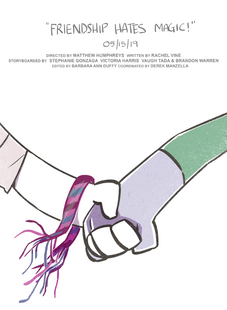 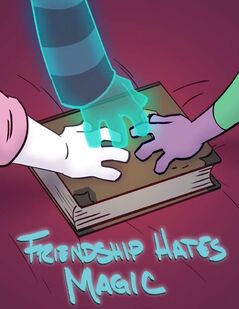