Scrooge McDuck Wikia
Register
Don't have an account?
Sign In
Advertisement
in: Out of universe, Real-life People, Artists (Real-Life),
and 3 more

Gaucelm stories
Gaucelm de Villaret (born October 20th, 1985), usually known as just Gaucelm, but also as "Orora" on several Disney-oriented social media, is an independant French cartoonist and artist who has worked on a number of unlicensed or otherwise unofficial Disney comics and fanart, including for the officially-recognized French fanzine Picsou Soir.

Gaucelm grew up with many Disney comics, being subscribed to the Journal de Mickey during most of the 90s, and regularly read French Disney publications such as Mickey Parade and Picsou Magazine. This would be a very influential medium on his style.Throughout the years, he has worked in animation, character-design, book illustration and many personal commissions.

Works in the Disney Comics Universe

Gaucelm's first Disney-duck-influenced comic was Selfie!, originally meant to be a stand-alone parody for a college assignment.

His Prime Universe work was the one-page comic McScrooge, which remains one of his most notable. It and a later one-page comic, Howard the Duck and Donald Duck, which saw Donald meet Howard the Duck and Super Duck, were both granted a measure of officialness when they were reprinted in the first and second issues of the authorized fanzine Picsou Soir. He also helped launch the An Exquisite Duck! comic strip, by drawing the first episode (that didn't rely on reused art assets) and visually creating antagonist Zlana Van Hydroolik.

He also did the cover art of fan magazine Picsou Soir #5 of fall 2020, portraying former Disney magazine cover artists Olivier Fiquet and François Fiquet as an anthropomorphic cockatoo and duck. The Sleeping Beauty in the Stars, who is used as Gaucelm's "Orora" avatar in the Disney forums, also makes an appearance.

Another side project of his is Ice Sword Legacy: Green Scepter, an unofficial sequel comic to the Mickey Mouse and the Sword of Ice saga by Massimo De Vita, centered on the Sleeping Beauty in the Stars. So far, only two pages were made (including an early prototype one of which the canonicity is ambiguous).

He also did miscellaneous fanart of Duck/Mice comic universe characters, and parody art of pop culture icons such as John Hughes movie posters: The Quackfast Club, Sixteen Canned Ducks and Quack Science. Another such parody series include Sailor Loon, with Dickie Duck as Sailor Moon and Parceiro as Tuxedo Mask. 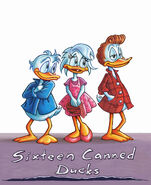 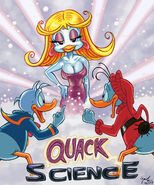 Cover of Picsou Soir #5 with Donald Duck, Olivier Fiquet, Patrice Croci and the Sleeping Beauty of the Stars.