Ghost Cat stories
The Ghost Cat is the ghost of a male non-anthropomorphic cat; in undeath, he gained some anthropomorphic qualities, like other animal ghosts in the Haunted Mansion.

The Ghost Cat was a cat who, after expending eight of his nine lives (via a "horse-and-buggy incident", a swimming pool, a fire, malaria, a high-wire act, choking on too large a bird, and two separate instances of "bad clams"), was buried in the Pet Cemetary of Haunted Mansion, his gravemarker ironically surrounded by the vengeful-looking tombstones of five birds for whose deaths the feline had been responsible. This intelligent and surprisingly well-dressed Cat is the witty fatalist of the Pet Cemetery ghosts, often at odds with the romantic and irrational ghost poodle Fifi, and often pestered by the ghosts of the birds he'd eaten. After the Ghost Cat found his forgotten ninth life again in 2005, it was stolen and wasted by Fifi, renewing the bad feelings between the cat and dog.

The Cat's tombstone was one of the additions to the Disneyland Haunted Mansion’s Pet Cemetery tableau in 1993. 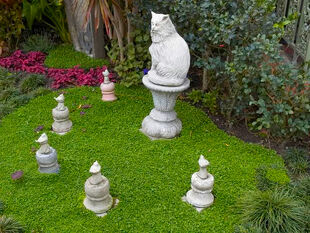 The Cat and Ghost Birdies' tombstones in The Haunted Mansion.
Community content is available under CC-BY-SA unless otherwise noted.
Advertisement