Granny Ghoul stories
“Granny Ghoul” was a human woman who is now a ghost.

In life, this woman was a Peoria socialite and silent movie vamp. She had died by the middle of the 20th century and retired as a ghost to the Haunted Mansion. Quickly taking to this new milieu, she already found mortals odd and slightly frightening by 1969, when she was interviewed about the imminent opening of the Mansion to mortals as part of the Disneyland theme park. As a ghost, she usually sits in an armchair by the ghostly green fire in the Great Hall; when pressed to move, she does so by levitating inside her chair, rather than ever getting up.

Granny Ghoul, created for the Disneyland attraction The Haunted Mansion, first appeared in a 1969 radio spot usually known by the title of Granny Ghoul, which promoted the opening of the Mansion. There, she was voiced by Paul Frees doing a Ruth McDevitt impression. 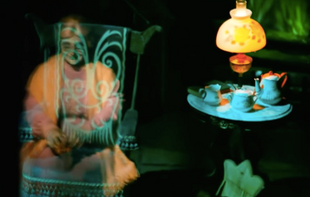 Granny Ghoul at the Walt Disney World Mansion.
Add a photo to this gallery

Retrieved from "https://scrooge-mcduck.fandom.com/wiki/Granny_Ghoul?oldid=49975"
Community content is available under CC-BY-SA unless otherwise noted.