Small flying orbs of light and magic, the Guardians are embodiments of Yen Sid's magic who roam and maintain the Wasteland; if the Guardians are extracted from the land, the realm will become uninhabitable. Though incapable of speech, they are fully sentient. There are two main kinds of Guardians: the Tints, who embody Magical Paint, and the Turps, who embody Magical Thinner. The former are figures of creation and maintenance while the latter are vengeful and vindictive (though it would be much too reductive to classify the Tints as merely good and the Turps as merely evil). Tints and Turps can exploit the abilities of their keyed substances to an extent, with the former being able to turn Blotlings good and the latter to dissolve them.

Guardians sometimes develop an interest in specific mortals. One, Gilda's Guardian, the last of a third breed of Guardians originating in Autotopia who were wiped out during the Blot Wars — the Racing Guardians —, accompanies the racer Gilda to serve as her literal guiding light. Another, the large Turp known as the Sprite, serves as Pete Pan's off-kilter counterpart to Tinker Bell. And during his travels to Wasteland, Mickey Mouse was often followed by a flock of helpful Guardians — a majority of Turps or Tints depending on how much Thinner or Paint he used when fighting with the Brush.

Original concept art for the Guardians called for them to be smoke-like humanoids, which was scaled back to multicolored orbs of light, and finally to just orbs of light of a single color each, due to practical issues with the C.G.I. rendering of the original models. 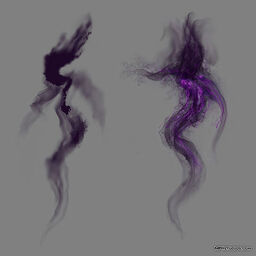 The early design of a Thinner Guardian.
Community content is available under CC-BY-SA unless otherwise noted.
Advertisement