The Most Dangerous Game… Night

The Gyropuddlians are characters from the 2017 Continuum.

A tribe of primitive humanoids smaller than ants, the Gyropuddlians (so named by Gyro), who communicate in strange grunts and fight with sticks and spears, are mysterious beings who inhabit McDuck Manor. After discovering their existence in 2018 thanks to his Micro-Phone, mad scientist Gyro Gearloose shrunk himself down to their size and attempted to become their God-King.

The Gyropuddlians soon rebelled against his tyranny and declared war over the "evil giants" of the Manor, using trained flies to transport the Micro-Phone throughout the house, intent on shrinking all of the McDuck household and imprisoning them. In the end, Louie's intelligence allowed him to solve the situation while providing the Gyropuddlians a new, safe place to live, in the minuscule "town" of a Scroogeopoly board game.

The Gyropuddlians appear in the 2018 episode of DuckTales 2017, The Most Dangerous Game… Night. 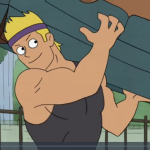