Lavalamp of Epicness
H2-“Oh No”, also spelled H2OhNo, is the nickname a male water-like alien from the 2017 Continuum's Yonder Galaxy.

H2-“Oh No” is the nickname given by his many victims to a villainous character (made of 98% water and 2% slime) who travels throughout the Yonder Galaxy in a giant space cruiser, stealing the water of every watery planet he can find, and destroying those without water out of spite.

Shortly before the arrival of Lord Dominator, he was a fairly high-ranking contestant for the title of "greatest villain in the galaxy", making #15 on the Galactic Villains Leaderboard at his peak (though he later dropped to #25, then #33, then briefly made it back to #19 before returning to #20, and finally clocking in at #32). Like most other villains in the Galaxy, he was subsequently defeated by Lord Dominator in her bid to conquer and then destroy the entire Galaxy.

H2-“Oh No” was created by a fan (going by the name of Lava) on Tumblr as part of the WOY Villain Leaderboard Challenge instigated by Francisco Angones, wherein fans were invited to submit their own original Wander Over Yonder villains who would then get a ranking in the official Galactic Villains Leaderboard.

H2-“Oh No” had the honor of being the top-ranking fanmade villain in the first edition of the Leaderboard released on Frank Angones and the Suspenders of Disbelief, just below the Potted Plant. 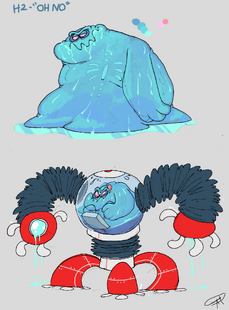 Lava's original concept art of H2-“Oh No”, also showing the exosuit he has to use to move about on dry land.
Community content is available under CC-BY-SA unless otherwise noted.
Advertisement