What Ever Happened to Donald Duck?

Goldie O'Gilt agrees to become Louie Duck's mentor in all things underhanded, but only if he'll use his supposed friendship with psychopathic rich kid Doofus Drake to get her into his select birthday party — and get her hands on a significant part of the Drake treasury which Doofus has decided to give away to his guests… but only if they're good and obedient. Can the unlikely duo keep up their charade even though all the other guests at Drake's party are also con artists? 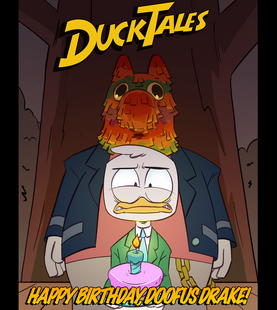