Scrooge McDuck Wikia
Register
Don't have an account?
Sign In
Advertisement
in: Characters, Males, From unidentified parallel universes,
and 5 more

This Hatbox Ghost was a human man who is now a ghost, and is a parallel universe's counterpart to the Prime Universe Hatbox Ghost.

This version of the Hatbox Ghost appears as a confident-looking middle-aged man with curly, voluminous hair. He does not always wear a top hat, and instead of the operatic high collar of most of his counterparts, sports a more down-to-earth double-breasted jacket and tie. In 2020, he was among the parallel Hatbox Ghosts who were accidentally summoned to Rain's World under mysterious circumstances.

This Hatbox Ghost is one of the fanmade Tumblr variations of the character who made cameos in the Charlie's Head Is In The Hatbox series, beginning with the 2020 comic From Left To Right; he was created by Tumblr user “Maxine”, of the blog meme-ment0-mor1, who noted that this Hattie's mortal form was based on actor Brent Carver. 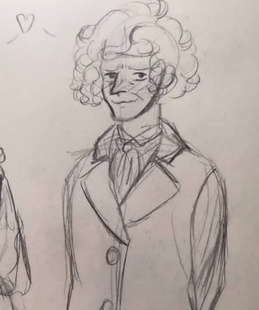 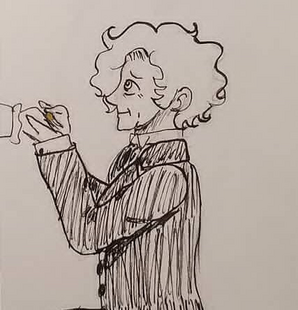 Second such sketch, seemingly showing him giving his version of the Beating Heart Bride a ring (whether engagement or wedding, it's hard to tell).
Community content is available under CC-BY-SA unless otherwise noted.
Advertisement