This Hatbox Ghost was a human man who is now a ghost, and is a parallel universe's counterpart to the Prime Universe Hatbox Ghost.

This version of the Hatbox Ghost appears as a tall, thin man wearing a stylish jacket and the inevitable top hat. In 2020, he was among the parallel Hatbox Ghosts who were accidentally summoned to Rain's World under mysterious circumstances.

This Hatbox Ghost is one of the fanmade Tumblr variations of the character who made cameos in the Charlie's Head Is In The Hatbox series, beginning with the 2020 comic From Left To Right; he was created by Tumblr user “Stradivarius”, who posted numerous painterly depiction of this mortal variation of the Hatbox Ghost on the blog of the same name. 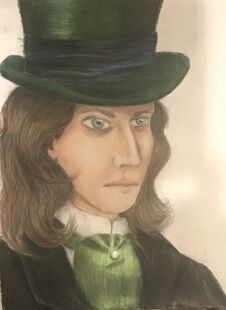