Henry Morgan stories
Captain Henry Morgan was a man of unclear species (either a human being or a dognose) who later became a ghost.

One of the most infamous pirates of the 17th century, Captain Henry Morgan amassed a huge fortune which he sought to hide on a desert island. His first pick was Old Jack's Island, where he abandoned one of his underlings, Old Jack. However, trying to recover the treasure years later, Morgan fell afoul of a time-travelling Scrooge McDuck and his nephews, and were eventually forced to flee the island as it sank beneath the waves due to volcanic activity.[1]

Having once again amassed a large fortune, Morgan took it to a a different island in 1669. He mapped the island out himself, hiding the only map in the Bucket o'Blood inn in Duckburg. After returning to the island and burying his treasure, he dueled his treacherous first mate Jolly Roger to the death, with Roger eventually getting the better of Morgan and stabbing him through the neck; however, Roger was unable to locate the treasure, which remained safely buried.[2]

The ghost of Morgan would later manifest to an old sailor, revealing the location of the map to him; the old sailor later passed the secret onto Yellow Beaks, who located the treasure in 1942 with the help of Donald Duck and his nephews.[3] According to a different account, it was in 1939, and alongside Mickey Mouse and Goofy, that Donald was led by Yellow Beak to the treasure; in this account, Morgan's ghost actively helped them avoid the many dangers of his island.[4]

Henry Morgan is mentioned throughout the 1942 story Donald Duck Finds Pirate Gold, adapted from a 1939 film project whose very title would originally have been Morgan's Ghost. He was one potential character sketched out in concept art by Marc Davis for the Pirates of the Caribbean ride, but didn't make the cut. Nevertheless, a version of Henry Morgan in the alternative continuity of the Pirates of the Caribbean film series later gave Morgan a major expanded role.

The 2000 story Old Jack's Island, written and drawn by Marco Rota, saw Donald Duck, Scrooge McDuck and Huey, Dewey and Louie Duck unwillingly going back in time to the 17th century, meeting Morgan at his height. Although the general iconography was similar to the plot of Morgan's Ghost (with Morgan burying pirate loot on an island and later seeking it out again), the specifics do not actually connect back to the events recounted in the seminal 1942 story. Indeed, this story depicts Morgan as an anthropomorphic nose, contrary both to concept art for Morgan's Ghost and to Marc Davis's 1960's sketch.

Historically, Henry Morgan was actually a privateer, not a pirate, to the extent that he eventually became Lieutenant Governor of Jamaica; he is believed to have been born around 1635, and died on land of a mundane illness on the 25th of August, 1688 — far from the picturesque duel to the death with his (fictional) first mate Jolly Roger recounted by Yellow Beak in Donald Duck Finds Pirate Gold. 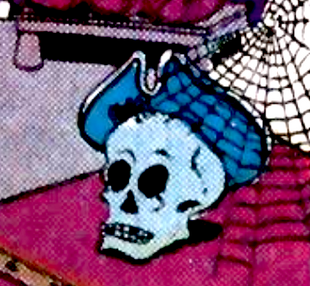 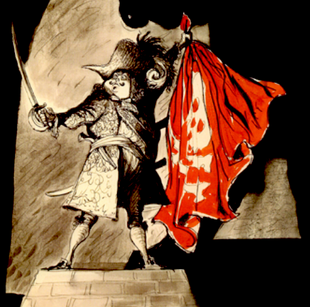 Marc Davis's sketch of a living Henry Morgan for Pirates of the Caribbean (1967).