Hey, Daisy, Whatever Happened To Scrooge?

Hey, Daisy, Whatever Happened To Scrooge?

October of 1991 (release date)
The 28th entry in the Hey, Daisy, Whatever Happened To Scrooge? series was written and drawn by Don Rosa. It features potential versions of Daisy Duck, Donald Duck, Huey, Dewey and Louie Duck, and the grave of Scrooge McDuck.

In a glimpse to a timeline where the Unaging Effect never existed and Scrooge McDuck died in 1967, the aged Duck family visits his grave, with Daisy asking Donald to tell her the story of Scrooge's final adventure…

This entry in the Hey, Daisy, Whatever Happened To Scrooge? series, first published in the German fanzine Der Donaldist - Sonderheft #77, was printed in the United States of America in in Walt Disney Treasures #2 (2008) and in Volume 3 of the Don Rosa Library. It is without a doubt the most famous entry in the series, having served as the opportunity for Don Rosa to present his vision of the epilogue to the “canon” of Carl Barks's stories and his own, with Scrooge dying and the triplets growing up. The date of 1967 was chosen as the year Barks stopped drawing new adventures of Uncle Scrooge in the real world. 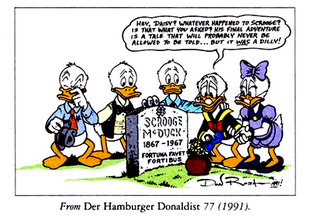 A colorized version of the scene which was featured on his blog by Chris Barat in 2014.
Community content is available under CC-BY-SA unless otherwise noted.
Advertisement