High Rider is a comic one-pager written and drawn by Carl Barks. It features Scrooge McDuck.

A panel was originally cut from the story to accommodate space for the infamous “Dell Pledge”, which would have been the fourth, not counting the title space. In turn, the art on the last panel was altered, presumably by another artist than Barks, to extend the panel. 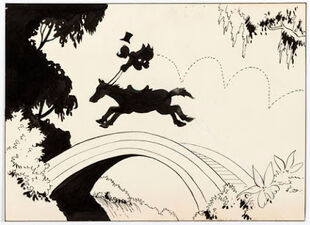 The “lost panel” rediscovered in December of 2018 when it was put up for sale on a specialized website.
Add a photo to this gallery
Retrieved from "https://scrooge-mcduck.fandom.com/wiki/High_Rider?oldid=33248"
Community content is available under CC-BY-SA unless otherwise noted.