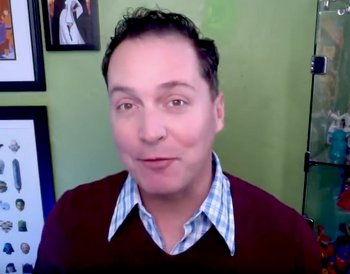 Ian Christiansen, formerly known as Jonathon Christiansen, and also known by the punnish pen name of Opinian, is an American actor and artist who worked at Disneyland in the 1990's.

In the 1990's, Christiansen worked as a Cast Member in Disneyland, portraying various Disney characters both in meet'n'greet events and in parades.

His most notable claim to fame in his Disney career is that he portrayed two fully original Haunted Mansion live characters for the 1995 and subsequent Halloween Park-wide overlays, first Lord Ravenscroft then the Phantom of Disneyland. Some time after this, Christiansen, being an artist as well as a performer, stopped making live appearances and was instead recruited as designers for ornate timepieces throughout the Park.

Christiansen has since left the Walt Disney Company, and, among other activities, is now the creator of a review-focused YouTube channel, Opinian, with an associated Twitter account at @OpinianGiver. There, he has, on occasions, spoken about his Disney work.

Retrieved from "https://scrooge-mcduck.fandom.com/wiki/Ian_Christiansen?oldid=39372"
Community content is available under CC-BY-SA unless otherwise noted.