Sometimes a Nickel Spent is a Dollar Saved

Jarvis is an anthropomorphic dog.

A middle-aged man with a long wrinkled face and brown mutton-chops, the impeccably impassible Jarvis worked Scrooge McDuck's chauffeur in the early 2010's.

Jarvis appears in the 2013 one-pager Sometimes a Nickel Spent is a Dollar Saved, by Daan Jippes. Why Jippes used Jarvis instead of Scrooge's usual chauffeur James is unclear.

Jarvis as drawn by Jippes bears a physical similarity to notorious British actor David Warner, who, among many roles, worked for Disney on several occasions (though as they were all relatively minor, they are unlikely to be those which inspired Jippes to caricature him as Jarvis, if indeed the resemblance is intended). 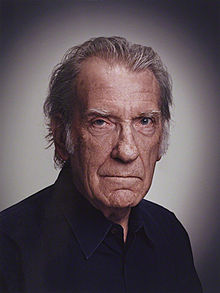 David Warner.
Add a photo to this gallery
Retrieved from "https://scrooge-mcduck.fandom.com/wiki/Jarvis?oldid=28276"
Community content is available under CC-BY-SA unless otherwise noted.