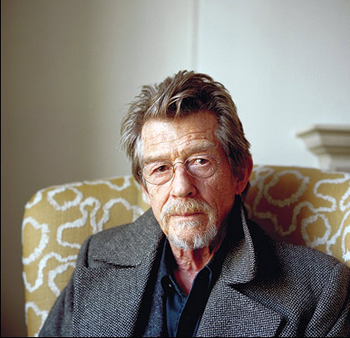 Regarded by many as one of the finest, if not the finest, English actor of his time, John Hurt began his career on television in the 1960's and had risen to great fame by the 1980's, portraying such difficult and adult roles as the Elephant Man in David Lynch's film of the same name. It was during this period that he played his main Disney role, the villainous Horned King in The Black Cauldron. He was also considered for the role of Jafar a decade later, but the part was eventually given to Jonathan Freeman, perhaps because it was felt that it was too soon for Hurt to voice a second, sorcerous main antagonist in a Walt Disney Classic.

Hurt's career continued throughout the rest of his life, with two of his most fondly-remembered characters, wizardly wandmaker Garrick Ollivander in the Harry Potter films and the Doctor in the science-fantasy series Doctor Who (a role he undertook in 2013), coming in his old age. However, he died in 2017, at the age of 77, from a pancreatic cancer that had plagued him for over two years.

Retrieved from "https://scrooge-mcduck.fandom.com/wiki/John_Hurt?oldid=39385"
Community content is available under CC-BY-SA unless otherwise noted.