The Jovians are the native inhabitants of the planet Jupiter in the Solar System. Green or pinkish humanoids with long, skinny limbs and webbed feet, the Jovians eat metal and are, as a civilization, as jovial as their name suggests. For reasons unknown, their spoken language is identical to Earth's English.

Though their technology allows them to fish for small meteorites (edible to them) in the Asteroid Belt, the Jovians have not made official contact with Mankind. On the other hand, for over a thousand years, they have had close and unpleasant relations with Saturn, as the Saturnians have tried over and over to conquer Jupiter for their own nefarious purposes.

The Jovians first appeared in the 1960 story Uncle Scrooge's Money Rocket and made other appearances in stories featuring Rebo, including The Return of Rebo. Though not a character per se, the Jovians possess an INDUCKS code, Gioviali. Their Italian name is a pun, as it simultaneously means "jovial" and "Jovian", hence their extremely friendly demeanor.

When the Jovians appeared in Money Rocket's novelisation, Scrooge in Space, the illustrator, apparently unfamiliar with the original comic, redesigned them based on the description given in the novel, resulting in four-legged, mechanical, egg-shaped creatures rather than biological humanoids. Their Italian name is a pun, as it simultaneously means "jovial" and "Jovian", hence their extremely friendly demeanor. 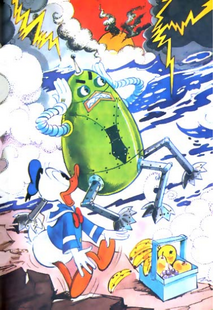 Donald encounters a redesigned Jovian in Scrooge in Space.

Their Italian name is a pun, as it simultaneously means "jovial" and "Jovian", hence their extremely friendly demeanor.