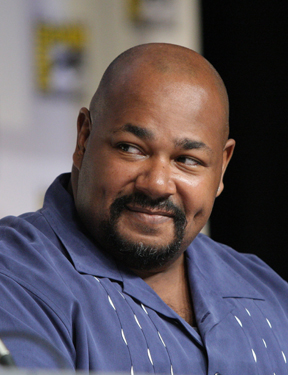 Kevin Michael Richardson (born October 25, 1964) is an American actor who provides voices for a number of characters in animation and video games.

Known for his extremely deep, villainous voice and has been playing a wide variety of characters since the early 1990s. His Disney roles are no exceptions, with such roles as dastardly Lord Felldrake in Legend of the Three Caballeros, bombastic Captain Gantu and Cobra Bubbles in Lilo & Stitch and its various spin-offs, intergalactic evildoer Lord Hater in Wander Over Yonder, pirate Yang in The Pirate Fairy, and Ian the Eater in The Princess and the Frogs. He also voiced Thaddeus Hunt and Mulviro in The Legend of Tarzan, Pharaoh Tutan and Tumbaa in Timon & Pumbaa, Kavo in The Emperor's New School, the Bear Doctor in Mickey Mouse: The Series, Basi in The Lion Guard, Cheeks and Ray-Ray in Ariel's Beginning, and Sir Oliver, Omar and King Kamea in Sofia the First.

In terms of recast roles, he portrayed the god Hephaestus in Hercules: The Animated Series, his brother King Neptune in Jake and the Neverland Pirates, Jim Crow and Prince John in House of Mouse and Henry in The Country Bears. He voices the Ghost Host in HalloWishes, but nowhere else, and also voices alternate versions of Flintheart Glomgold in DuckTales 2017, Sebastian in the Kingdom Hearts series and Happy in The 7D.