What Ever Happened to Della Duck?
Last Christmas is the DuckTales 2017 Season 2 Christmas Special, a cartoon written by Francisco Angones (along with DuckTales 2017's normal team of writers) and directed by Jason Zurek. It features Scrooge McDuck, Huey, Dewey and Louie Duck, Donald Duck, Della Duck, the Buzzard Brothers, Launchpad McQuack, Captain Foghorn, Goldie O'Gilt, Flintheart Glomgold, Webby Vanderquack, Duckworth, Bentina Beakley and the Beagle Boys. The 2017 Continuum versions of Rhutt Betler and the Ghosts of Christmas Past, Present and Future also make their debuts, and Flintheart Glomgold, Ebeneezer Scrooge, Santa Claus and Tiny Tim are all featured, and Jörmungandr is alluded to.

Every Christmas, Scrooge McDuck takes a break from his responsibilities by traveling back in time to history's greatest Christmas parties alongside the Ghosts of Christmas Past, Present and Future. But this year, everything goes wrong as the Christmas party they choose proves less than festive, Dewey hitches a time ride to meet a younger version of his mother, and there seems to be something seriously wrong with the Spirit of Christmas Past… not to mention the Wendigo prowling the woods near McDuck Manor! 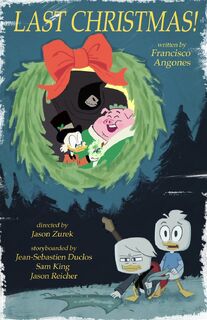 Serving as the Christmas special, it features a Christmassy version of the opening theme (with alternate lyrics by Francisco Angones) and all-new end credits done (by Mike Peraza himself) in the style of the ones from Mickey's Christmas Carol, to which the cartoon holds a great debt, if only in the designs of the Christmas Ghosts. According to Frank Angones and the Suspenders of Disbelief, several elements were cut for time, such as more dialogue from Captain Foghorn.

Last Christmas shares its name with a popular 1980's Christmas song, and also with the 2014 Doctor Who Christmas special, also named after the song. Speaking of Doctor Who, the episode contains a discreet (and, according to Angones, perfectly intentional) reference to it as David Tennant's Scrooge mutters "Eugh, time-travelers", rather an ironic statement when Tennant, during his time on Doctor Who, played one of the most famous fictional time-travelers of all times, namely the titular Doctor.

Last Christmas features Russi Taylor playing a young Donald Duck, using much the same voice that she used for Huey, Dewey and Louie Duck in the original 1987 DuckTales series. To make the connection explicit, Donald can be heard using the boys' recurring catchphrase from the 1987 show, "Quack-a-roonie!", during the battle with the Wendigo.

Although Mrs Beakley can be seen flirting with the Ghost of Christmas Future, Angones has clarified that he is not, in fact, the unseen grandfather of Webby.