The League of Eve-il is a group of female criminals that antagonize Scrooge McDuck, Darkwing Duck, and their friends in the story Dangerous Currency. Magica De Spell is the Leader and Founder of the League. She wanted to the League so as to achieve her goals. 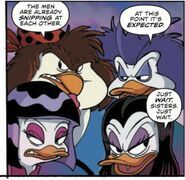 The League of Eve-il is in an alliance with The Phantom Blot, The Beagle Boys, and The Fearsome Four (The Fearsome Five minus Negaduck) and they are later joined by Negaduck.