Long-Legged Jeb, who, according to his epitaph, died by "getting tangled up in his own web", is one of the unlikely animals buried in the Haunted Mansion's Pet Cemetery, suggesting he was a pet of one of the house's Masters in life — more likely than not the Ghost Host.

Long-Legged Jeb was one of the tombstones added to Disneyland's The Haunted Mansion as part of the new front-yard Pet Cemetery area. Unlike other “residents“ of the Pet Cemetery, Jeb has yet to be confirmed as an actual ghost within the Mansion, though it's a natural assumption to make that any individual whose grave is part of the Mansion is also one of the 999 happy haunts. 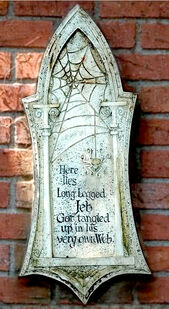 Jeb's tombstone prop in The Haunted Mansion itself.
Community content is available under CC-BY-SA unless otherwise noted.
Advertisement