Llewelyn "Louie" Duck is a young anthropomorphic duck and the 2017 Continuum's counterpart of Louie Duck.

Louie is the triplet brother of Huey and Dewey, living with their uncle Donald ever since the disappearance of their mother Della, about whom they didn't remember a thing. Unlike his counterpart in the main universe, Louie is different from his brothers, as they are from him. Louie is distinguished by a laid-back attitude and a willingness to venture into morally questionable territory — prompting him to be dubbed "the evil triplet", though that is of course exaggerating. Seemingly taking after his uncle Gladstone, Louie loathes work and would rather have success fall right into his arms, as evidenced by his favorite bookBe a Gajillionaire in Three Days! Despite this, he recognizes the "coolness" of going on adventures. His great-uncle Scrooge has noted his gift for tactical planning and "seeing all the angles". He is clothed in a green sweatshirt.

Lying – it's the responsible thing to do.

The last thing I need is Scrooge snooping around and finding any of my devious, yet delightful schemes.

I thought life with a treasure hunter would be way more treasure and way less hunting!

I gotta tell ya, selling out is everything I dreamed it would be!

This version of Louie first appeared in 2017 in Welcome to Duckburg. 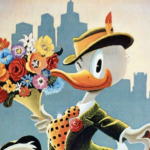