Be Leery of Lake Eerie

A wealthy denizen of Duckburg, Magnum P. Highpower is an avid (and morally-bankrupt) big game hunter who collects the mounted heads of bizarre and one-of-a-kind creatures. In 1972, he attempted to take down Trashivore the Dragon despite the protests of the Junior Woodchucks, arguing that there was no rule against hunting dragons without a license. However, he had failed to account for Trashivore's imperviousness to bullets, and after a laughable fiasco, fled far from Lake Eerie, nagged by Motor Sludge Catfish on the way.

Magnum P. Highpower serves as the main antagonist of the 1972 story Be Leery of Lake Eerie and its remakes by Daan Jippes and Giovan Battista Carpi.

Especially in the Jippes and Wright versions of the story, Highpower looks identical to Argus McSwine; it is thus a reasonable assumption on their basis that "Magnum P. Highpower" is simply another alias of McSwine's, and that one is in fact dealing with the same good old villainous pig. However, in Carpi's version, Highpower looks significantly different; combined with the usual McSwine's apparent lack of interest in hunting, this is enough for the Scrooge McDuck Wiki to have declared him a different character, though we acknowledge that there is uncertainty on the matter.

Pictured below are Carpi's Highpower, Kay Wright and Daan Jippes' considerably more McSwine-like Highpowers, and a sketch from Carl Barks's original storyboard, all of the same panel. 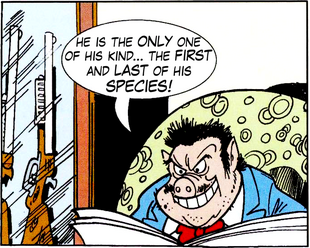 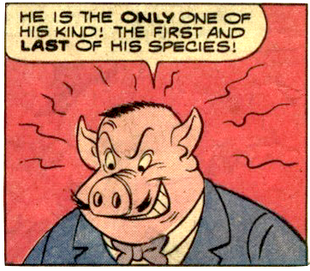 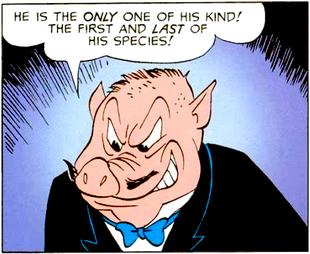 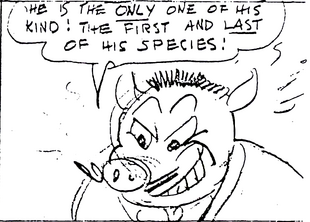 Carl Barks
Add a photo to this gallery
Retrieved from "https://scrooge-mcduck.fandom.com/wiki/Magnum_P._Highpower?oldid=21953"
Community content is available under CC-BY-SA unless otherwise noted.