Martha Ravenswood, born Mary Baxter[1] was a human woman who may now be a ghost.

Martha Ravenswood was the long-suffering wife of unfaithful and cruel Henry Ravenswood, the mining baron of Thunder Mesa around the middle of the 19th century, and, as such, the mother of Melanie Ravenswood. She is believed to have died in the 1860 earthquake that created Phantom Canyon; at any rate, she was no longer around by then to prevent the Phantom's wicked attempts to thwart Melanie's attempts to get married and escape his corrupting influence.

Martha Ravenswood was created as part of the backstory of the Disneyland Paris ride Phantom Manor, which opened in 1992. She was then only mentioned on a tombstone.

She is of more importance in the short story Family Secrets (2012), and eventually made a more proper debut in the 2019 updates to the ride itself, now appearing alongside her husband in a wedding portrait which is actually a Changing Portrait, morphing from Martha as Henry's companion to her unfortunate daughter. 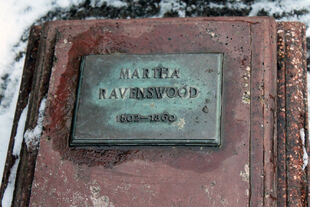