The Birth of Dugan (mentioned only)

Mary Duck (Mary de Papero in Italian) might be the name of a female anthropomorphic duck-loon hybrid, the mother of Dugan Duck who is also Fethry's sister.[2]

Eider Duck and Lulubelle Loon's daughter and thus the sister of Fethry Duck, 'Mary' Duck was expecting a child. However (according to Fethry's wacky explanation, at least), the stork carrying the egg got lost and accidentally dropped the baby in the jungle. The baby would later be found by his uncles Fethry and Donald and raised under the name of Dugan Duck. 'Mary''s whereabouts are unknown since she had the child; at least it is probable she never married, as Dugan shares her family name. It is possible that when Dugan was brought back to Duckburg, 'Mary' took care of him, as Fethry does not seem to care for him permanently like Donald does Huey, Dewey and Louie.

Fethry's sister was mentioned one single time, in 1982's The Birth of Dugan. She was not named in the story; the moniker 'Mary De Papero', translated as Mary Duck, was likely created by a fan, but first gained popularity when it was mistakenly used on PaperPedia and Picsou Wiki (respectively the Italian and French equivalents of Scrooge McDuck Wiki). 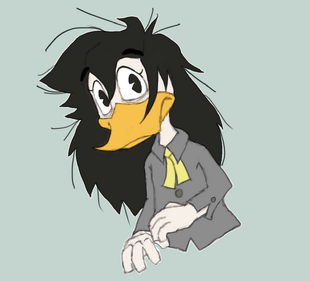 A fan depiction of Mary that accompanied a fairly detailed fanmade bio. (Original Source of the Design, Source of This Artwork)