After putting on a play based on The Divine Comedy, Mickey Mouse and Goofy are placed under a hypnotic spell by Peg-Leg Pete's associate Abdul, and soon find themselves traipsing through a ludicrous, dreamlike version of Dante's Hell, populated by known faces and where the "sins" being punished are everyday annoyances like lying newscasters or unruly school-pupils!

Mickey's Inferno was first serialized in six parts in the Italian Topolino #7 through #12. It was printed in English in (rather appropriately) Walt Disney's Comics and Stories #666, with localization by Dwight Decker and David Gerstein. A scene in Canto V, featuring demonic barbers, was cut from this printing. Still censored, though in different ways, the story was reprinted as the first of Papercutz's series of Disney Great Parodies graphic novels, with a new translation by Nanette McGuinness and Stefan Petrucha. 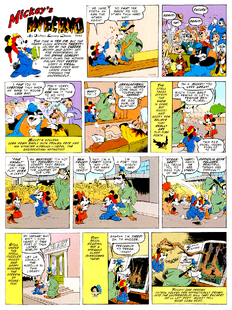 First page of the story in its earlier Gemstone printing.
Italiano
Community content is available under CC-BY-SA unless otherwise noted.
Advertisement